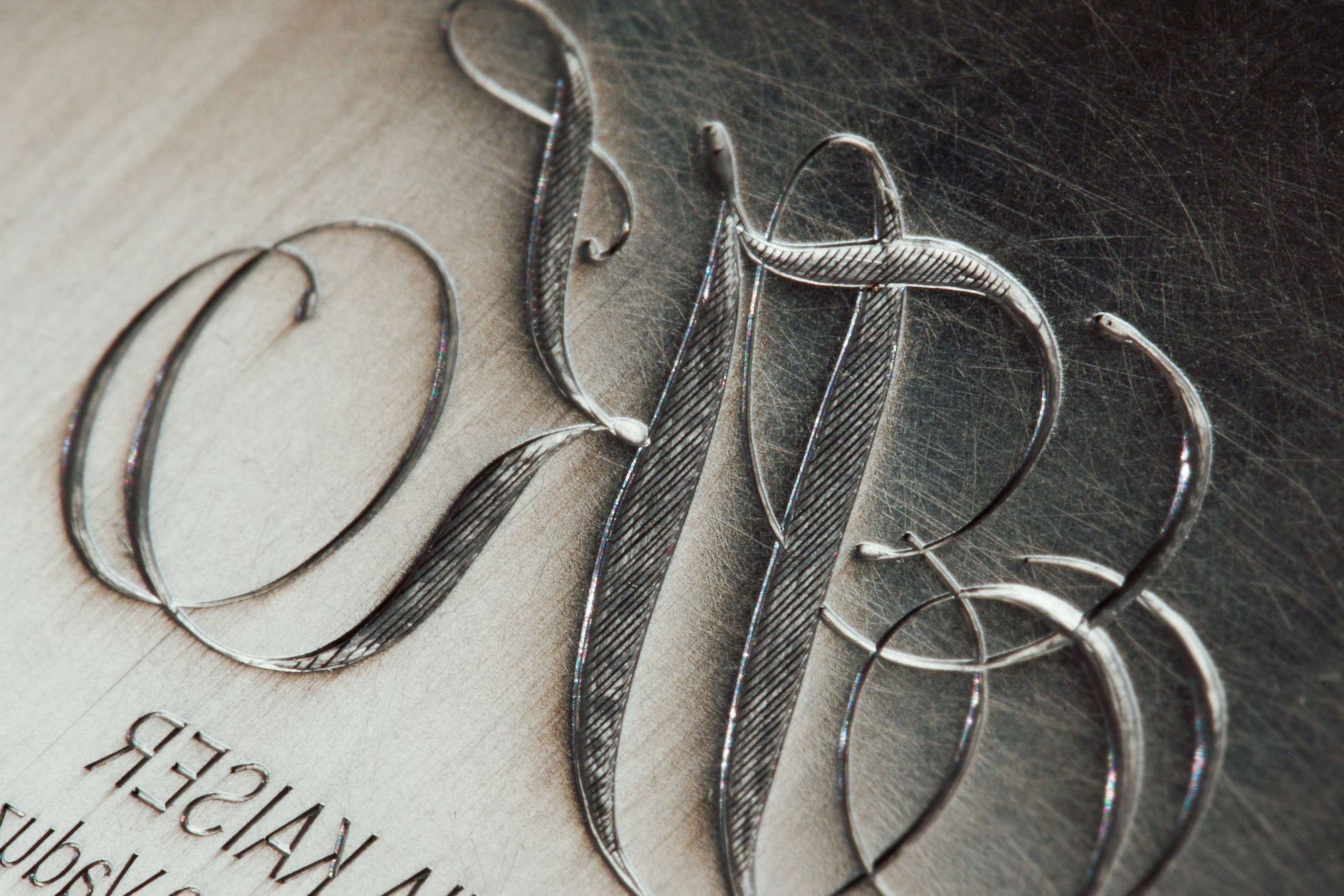 A process in which technical knowledge and skills as well as artistic skills are required.

The steel engraving embossing technique is old and to some contemporaries seems rather antiquated. The mints in Europe have become as rare as the bell founders. But since people are still able to be enthusiastic about beautiful and extraordinary things in this day and age, the continued existence of this wonderful technology is also guaranteed for the future.

The steel engraving embossing is a gravure printing process that developed from copper engraving and its variants (etching, mezzotint, etc.). For a long time, copperplate engraving was the only way for an artist to create larger print runs. Well-known engravers were, for example, Albrecht Dürer from Nuremberg and Matthias Merian the Elder from Basel.
With the advancing spread of book printing, books were produced in ever larger editions, and printers and publishers were looking for a way to produce book illustrations in larger editions.
This was tedious with the copper plate, and willy-nilly several original plates had to be produced for higher editions. To avoid this fact, the engravers tried to engrave the image in the much harder steel plate instead of in copper.
Depending on the motif, the plate was either engraved directly with a graver or an etching was made and the plate was then etched with ferric chloride.
When this succeeded, the way was open for images in larger editions.
From 1820 the first steel engravings for pictorial representations and for illustrations in books can be identified.

Even today, steel engravings are still produced as individual pieces by the steel engraver. They have nothing to do with industrially produced printing forms that anyone can produce as often as they want and with consistent quality.
The steel engraving engraver of our time is a very sought-after specialist who, in addition to a high level of technical knowledge and ability, also needs a highly developed artistic ability in order to be able to implement the templates that are presented to him for engraving today.
Certainly the tools and the aids available to him are better than in Dürer’s time, but the main features of the work have remained the same.
But his imagination alone is able to give the writing or illustration this wonderful liveliness and depth through fine lines and adapted engraving depth, which cannot even come close to being achieved with any other printing process.
The artistic hand of the engraver creates a printed image that is not only present in the surface but also in the third dimension and thus gives the printed image that elegance through fine light and shadow effects that made steel engraved embossing so desirable in former days as well as today.
Just a few decades ago, it was common for engravers to draw the images or the fonts directly on the steel, reversely based on the template, and then gradually work out each individual section with a graver, chisel and punch, until the engraving after several test prints then corresponded to his idea and that of the customer.
The advancement of technology has also made it possible for our engravers to use film templates nowadays. The motif or the writing is transferred to the engraving by photographic means and then lightly etched. This saves the engraver having to draw a preliminary drawing on the steel. The actual engraving is then done as it has always been – by hand with a burin. This may still seem very tedious to the layman, but neither sophisticated etching technology nor CNC-controlled machines allow the engraving to be as differentiated as an experienced steel engraver can.
Every engraving is and remains an artistic handicraft, a unique piece that, even by the same engraver, cannot be repeated exactly in the same way and therefore has a particularly high level of protection against forgery. This special feature raises steel engraving far above all other printing forms.
It always bears the “handwriting” of a person and can therefore never be replaced or simulated by any industrial product.

As with copperplate engraving, manual printing on the copperplate press was originally common for steel engraving. The printer first had to rub the color from pigment and binder himself. The plate was then colored with the pad and wiped clean again with cloths and paper. Only the deepened engraving now holds the color.
As desired, the printer could leave a touch of color on the plate surface and thereby also print a “plate tone”.
This technique is still used today by artists who do printmaking.

For the larger editions that the steel engraving was supposed to achieve, this technique of hand printing was far too laborious. With the onset of industrialization and the invention of the steam engine by James Watt, attempts were made to replace laborious manual labor with machine work. The first looms were built in England and a little later, around 1850, the English built the first steel engraving machine that was able to perform essential work steps mechanically.
The very heavily built machines had a simple inking unit that made it possible to recolor the plates with each print run. Wiping with cloths was replaced by a squeegee and a roll of paper that could wipe the engraving bright with every print run. The paper from the roll is pulled forward a little each time, so that new, unused paper is always available. This made it possible to produce embossings quickly and in large numbers.

The minting shops in England took advantage of the opportunity and were able to offer the many small and large manufacturers, including the industrial companies that sprang up everywhere, as well as law firms and private individuals, letterheads and business cards in a new, much higher quality than the customers were used to from the predominant letterpress printing process.
Like the loom, a few years later the new technology came to the continent, where it found many enthusiastic followers. Back then, the machines were built in such a way that the inking unit was on top and the engraving on the bottom. As it was common in printing at the time, the sheets were laid in and laid out by hand. Since the steel engraving / embossing process is a direct printing process, this inevitably meant that the printed image was on the underside of the sheet when the sheet was inserted. It took a lot of skill to take the sheet out of the machine without smearing the fresh embossing again. The sparse literature indicates that the skilled woman’s hands did this flawlessly. For decades, this was the only way to do machine-made steel engraving. In the new century, however, a tireless ingenuity came up with a remedy.

The “handling”, which is tedious for the embosser, has been made much easier by a completely new design. The designers simply turned the story around. Basically the idea was simple – they put the engraving upside down and the problem was – almost – solved. The new design came on the market under the name “inverted”.
Suddenly it was possible to see the result of the embossing immediately after the embossing process and also to take the sheet out of the machine again without risk. In addition, this also opened up the possibility of making two embossings on the same sheet by twisting the sheet. With the previously used construction, this screwing in would inevitably have destroyed the first embossing. Embossing was faster and paper could also be saved.
The last development step that the steel engraving presses underwent was the construction of the automatic feeder and delivery system around 1960. This enabled the paper to be automatically fed through the machine, as it was the case with the letterpress machines that were generally used at that time.

This automation also increased production. The hourly output has now been increased to approx. 1500 to 1800 sheets from the previously possible 500 to 880 stamps that a skilled embosser could do per hour. The machines have now become rare rarities, as the production of new steel engraving machines both by the manufacturer in England and by the licensee for a German replica of the machine was discontinued at the beginning of the 1970s.
Therefore, the machines in the factories are looked after very carefully.
Any maintenance and repair work must be carried out by the embosser himself. Even today’s machines still work with the technology of the founding fathers, only slight modifications have prevailed. All steel engraving machines are exclusively single-color machines and depending on the subject, sheet size, difficulty, color type, etc. it is decided which type is used.
Even today there is no steel engraving without the knowledge, skill, patience and passion of the person who made it.

In addition to the artistic application, there are two major areas today, but they differ in essence: security printing and correspondence papers. Security printing is usually produced using the rotary process and is usually called gravure printing there. The engravings are fine and relatively flat, guilloches and parts of the text are embossed.
Steel engraving is regularly used in combination with other printing processes for stamps, banknotes and stocks. Inks specially produced for this area of ​​application are used which, in addition to being specially adapted to this process, also have many, in some cases hidden, properties that provide the paper printed with them with a high to very high degree of protection against forgery in every respect.

Since the beginning of this printing technique, letterheads and business cards in steel engraving have been used primarily for management letterheads, private papers, compliments cards, etc.
Discerning private individuals and the bosses of respected companies belong to the loyal fan base. A not insignificant aspect of a steel engraving work, in addition to the very high level of protection against forgery, is its unique appearance. For some customers, this may have been one of the decisive criteria for choosing the steel engraving embossing technique. Identical duplicates of the printing form and thus unlicensed reprints are practically impossible to produce and the customer can therefore have a very calm feeling that dishonest things are not happening in his name. The products are either produced using pure steel engraving or combined with other common printing processes. In principle, any combination is conceivable, but it requires a sure instinct in order not to overshoot the mark when combining. Very convincing works often appear in combination with blind embossing or foil embossing. However, fine combinations with letterpress or offset printing are also possible.
The print runs are just as varied as the customers. From 100 sheets for private individuals to several hundred thousands for large companies. Each customer is served individually.

The possibilities of the embossing techniques provide the creative with a great design tool. Distinctive print products with noblesse and understatement can be achieved in this way.
Nowadays papermakers offer an almost unmistakable variety of papers. In any case, the selection should be made together with the steel engraving machine. Of course, you can emboss on any paper, but outstanding results also require certain properties from the paper.